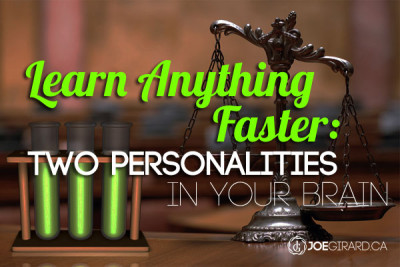 How many times do you think you did better that what actually happened?

“What was I talking about?”

Recently, I have been working on helping people see that it’s normal to overestimate our abilities.  And in fact – our brain is designed that way. When reviewing calls, doing tests, or simply trying to restate something you’ve heard, didn’t it seem to have gone better in your head?

Today, I will show you why that happens and a few simple ways to take back control.

I was on a sales call the other day and I know it went pretty good. I know, of course, there are areas in the call that I could have changed, slowed down, timed differently, etc. But overall, it went well. Then when discussing it with someone else, I explained it went a bit better than it did. I’m sure the more I talk about it, it will become the best call I ever did in my life – complete with drama, intrigue, and danger! Then when I go back to listen to the call, it will be just pretty good. Maybe a bit better than that.

How often does that happen to you?

Or what about on social media where we have this over-inflated sense of self and often we believe our own hype?

As I’ve been working with my teams these past few weeks, I noticed some trends and some major ah-ha moments in how they learn. And also how I learn too. To learn anything faster has to first start with being able to observe yourself and understand what you’re missing.

Overestimating your own abilities is called the “above-average effect” and it’s very common in our day to day lives. I’ve mentioned a wonderful book called Subliminal: How Your Unconscious Mind Rules Your Behavior

by Leonard Mlodinow where he looks at all the wild and weird things that happen behind the scenes in our brains.

In various studies, they found that it’s a totally normal occurrence for us to simply think we are better than we are.

This happens in nearly every profession as well.

Another study found that physicians who diagnosed their patients as having pneumonia reported an average of 88 percent confidence in that diagnosis but proved correct only 20 percent of the time.

It’s this overconfidence that can get you into trouble and even though you know on an intellectual level what is right, often your brain thinks otherwise.

The funny part about what Mlodinow writes is that we have an ironic tendency to recognize this over-inflated self-assessment and overconfidence and understand that it’s a problem – but only in others.

It boils down to the fact that our ego fights extremely hard to defend our honor and will do everything it can to keep us feeling powerful. So it’s good and bad at the same time.

Your two Brains: The Scientist and the Lawyer

So why are we so often misguided in our self awareness? As part of our quest to learn anything faster, let’s talk about two forces at work in our brain and how to take back control.

As a scientist, you work to gather evidence, seek out irregularities, and create theories around your observations. Then you work on testing those theories to make sure they’re right and constantly work on improving them.

The lawyer, on the other hand, begins with a conclusion they want to convince others of and then seeks out evidence to support it, while working hard to discredit anything that doesn’t.

Now, neither one is wrong, but you must be aware that this is happening all the time. Your mind is a pretty good scientist, but an absolutely fantastic lawyer. We often tend to believe our own BS because it makes us feel good and it reinforces positive thoughts. No one consciously seeks to find the truth in themselves because it can be uncomfortable.

But at the same time, if you were to just believe all the stats and facts, you may not take risks and go after your goals. So we want to embrace our inner scientist and lawyers and help them become better partners in our success.

Psychologists call this inner advocate thinking “motivated reasoning.” And what’s amazing is that brain imaging studies are now showing that we’re creating these unconscious biases when making decisions. Read more on how we make decisions based on emotions in my four part series.

When our brains assess emotionally relevant information, our brain automatically includes our wants, dreams, and desires. We may think that we make rational decisions and are strictly intellectual creatures, but these scans show otherwise. Mlodinow shares that these scans and studies show there is a physical mechanism for how our brains deceive us.

To achieve your goals, this is all important to allow you to dream and push out of the comfort zone. But keep in mind that in order for motivated reasoning to work, and to properly inflate your self-image, it must be to the right degree and no further. For survival, you can’t inflate yourself too much and you must maintain what scientists call the “illusion of objectivity.”

This is exactly why you can’t get people too excited about a opportunity and try and get them to see themselves too far from reality. When you help others take action on something, it has to be exciting AND believable to be effective. More on that another time…

[Tweet “When you help others take action on something, it has to be exciting AND believable to be effective.”]

Five Steps to Learn Anything Faster

Now you have a strong understanding of the forces at play in your mind and in the minds of others. So how can you retrain yourself to accelerate learning and growth?

[Tweet “To best serve others, be willing to get uncomfortable to get better”]

Recently I partnered up with a wonderful company called Enrollment Resources whose mission is to “pursue the truth” and we’ve been working with Admissions reps all over North America. It’s so much fun to be able to find those small process improvements, shift mindsets, and help these teams take back control of their days. It’s refreshing to be able to say, “hmmm, I’m not sure…let’s find out together.” To take the scientific approach to what has always been a lawyer-type of mindset. And as a consultant and trainer it is great to not push only my ideas on others but to solve problems collaboratively. If you are a rep and you are feeling overwhelmed, then this post should help you get some clarity and give you back control of your days.

These are exactly the kinds of projects I am looking for!

To learn anything faster requires you to stop doing what you have always done and be 100% honest with yourself first. Then the real fun begins!