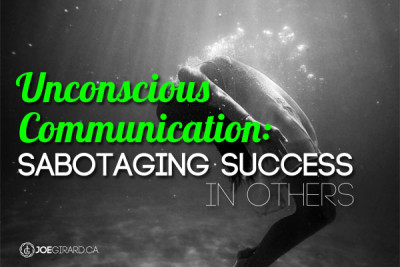 Do you ever find yourself pre-judging someone on whether they will be successful or not? Even if you don’t mean to?

When you communicate with other people, there are a multitude of unconscious signals you are giving and, no matter how much you try and force it, they somehow know what you really mean. And there are studies to prove it. Let’s look at some of these studies on unconscious communication and a few ways you can help others succeed instead.

I’ve always told people not to pre-judge or make assumptions, but rather to give everyone a complete opportunity to succeed – even if you’ve seen someone like them before. This happens all the time during sales calls, employee discussions, and even with our families. We want others to succeed, but we cant help unconsciously telling them otherwise.

As much as we know this intuitively, I recently found some studies that back up what I’ve been saying all along. PHEW! And it helped me dramatically shift my thinking from simply knowing I should do this to, I better be 100% intentional about this all the time. So make sure you read this!

The big realization is that we absolutely cannot fake our intentions.

These concepts have helped me improve all of my relationships – both professional and personal.

There’s too much to think about

A few weeks ago, I picked up this awesome book, Subliminal: How Your Unconscious Mind Rules Your Behavior

by Leonard Mlodinow. It is fascinating to learn about just how much we don’t know about ourselves and our unconscious behaviors. This past year I have been loving all of the research I have been finding on the wonderful field of social cognitive neuroscience. And only in the past decade or so, with the use of fMRI technology, have scientists been able to see what truly is going on in our minds. Science, yo!

We’ve all heard that our brain is like a computer and can process a ton of information, which is only somewhat true. Scientists have estimated that we only conscious of about 5 percent of our cognitive function. The other 95 percent goes on beyond our awareness and exerts a huge influence in our lives – beginning with making our lives possible.

A textbook on human physiology explains that the human sensory system sends the brain about 11 million bits of information each second but in reality the actual amount we can handle is somewhere between 16 and 50 bits per second.

Bottom line, we wouldn’t be able to survive if we had to process all the stuff that was happening to us at all the time. We need much of what we do to be automated. And the research is showing that this unconscious tier of our brain is more fundamental than our conscious one.

But this can make us feel like we don’t have control.

“We all hold dear the idea that we’re captain of our own soul, and we’re in charge, and it’s a very scary feeling when we’re not. In fact, that’s what psychosis is.” – Sam Bargh

When you start digging into unconscious communication, you quickly become hyper-aware of all the subtleties you miss each day.

A few studies on unconscious communication

Are you ready for some cool experiments that will get you thinking?

Students in an experimental psychology class were given rats to train how to run through a maze. The students weren’t aware that they were actually the subjects of the experiment. Half the class was told that their rats were from superior breeding and the other half were bred to have no sense of direction at all. Even though all the rats came from the exact same breeding.

They took the experiment one step further and told the students to treat the rats all equally, even though they knew the rats had different breeding. But still, unconsciously, they communicated their feelings of success to those rats.

Robert Rosenthal was one of the researchers in the rat study and he wanted to see how this applied to humans as well. He brought in some student experimenters, who were actually the experiments of the study. They were given pictures of people’s faces to show to their subjects. They were to ask the subjects to rate the face on the degree of success or failure they felt it reflected.

The faces that were on the photos had all been rigorously pre-tested and were the ones that were most deemed as neutral.

But that’s not what he told the experimenters. He told half of them that the faces they were showing were on the successful side, and the other group were told the faces were unsuccessful.

He then gave them all specific scripts to follow as they showed the faces to their subjects (so not to skew the verbal communication). All they had to do was show the faces and read the scripts.

It was shocking to find that not only the average was skewed, but every single student who was led to believe they were showing successful photos scored higher ratings than the other groups! Somehow they unconsciously communicated their expectations to their subjects.

Study #3: Humans, but only audio

Now this one really got me thinking…

A year after that human experiment, Rosenthal decided to give it a try, but with a little twist. They did the first experiment again, but this time recorded the audio of the experimenter as they gave their instructions.

Then they conducted the study again, but this time the subjects could only listen to the audio recordings of the experimenters, which removes all visual clues like eye contact or body language. Remember that these were scripts too!

Once again, the results showed bias, but only about half as much. Somehow through inflection, tone of voice, and other cues, the experimenters communicated how they felt about these photos, even when all the other factors were removed.

You are always subconsciously communicating your true feelings

As I read these studies last week, it made me really think about my intentions with people and how often I catch myself simply going through the motions. And how, during conversations, it’s totally normal to feel something negative about others, but try and say something positive.

We don’t intentionally mean to do this, but we must know it happens. And we must know that it affects those around us.

As Mlodinow says, “whether or not we wish to, we communicate our expectations to others, and often they respond by fulfilling those expectations. You can probably think of expectations, whether stated or not, that you have regarding most people you interact with.”

Rosenthal has done numerous other studies on this subject, especially with children and expectations and has concluded that “labeling children as gifted had proved to be a powerful self-fulfilling prophecy.”

It works both ways too. If you feel a child will be a poor learner, you contribute towards them being exactly that.

This goes hand in hand with the idea of not being a salesy weirdo.

[Tweet “To help others succeed, know that you always unconsciously communicate more than you say.”]

How to communicate success thoughts in others

Now you know how important unconscious communication is, what can you do about it? Here are a few ways to keep people moving forward:

Each day, can you do your best to be kind and inspire?

“Long before we can verbalize attraction or revulsion, we are attracted to the kind and repelled by the unkind” – Leonard Mlodinow

Earlier this year I talked about being more authentic and I will tell you that it has absolutely helped me get my head in the right place more consistently. And the more I read about habits, unconscious behavior, and neuroscience, the more I realize that there is so much more to what we do than we realize.

My promise to you is that I will bring these ideas and insights to you. But all I ask is that you put them to the test. Make an impact in the lives you touch and let’s learn how to get better together. Cool?

Remember to to like and share this post. And I would love to see your comments below on ways you communicate that work. Have you ever overcome a pre-judgment and found cool success? Share it with us!