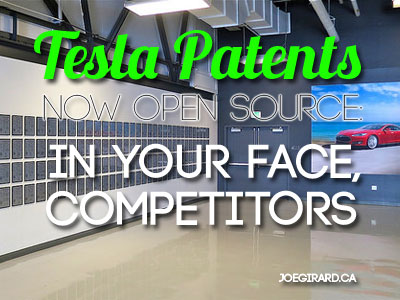 Yesterday, Tesla in a massively bold move, opened all of their patents to the public in a hilariously titled blog post, “All our patents are belong to you.” (which is a reference to an internet video meme from a few years ago, “All your base are belong to us“) What does this mean for the automotive industry? Huge opportunities, but will they act?

Elon Musk has been trying to nudge car manufacturers to explore more efficient, electric cars, and in this seemingly crazy move, he has thrown down the gauntlet to say, “C’mon guys, let’s get moving towards a better future.”

At first glance, it seems crazy to think that Tesla’s hundreds of patents (and even more pending), are now open source and available for all Musk’s competitors. But this move is something that demonstrates the TRUE leadership abilities of Elon Musk.

According to a Bloomberg Businessweek article yesterday:

Musk wants to promote a more dramatic shift toward electric cars, so he will do what he can to accelerate things. “I don’t think people quite appreciate the gravity of what is going on [with regard to global warming] or just how much inertia the climate has,” Musk said during a conference call. “We really need to do something. It would be shortsighted if we try to hold these things close to our vest.”

What a bold move and a call to action to mobilize the antiquated automotive market to take a real look at the impact they make on the environment, and the responsibility they have to society. By opening the patents, he is say that there are really no more excuses.

The blog post has drawn hundreds of comments, mostly supporting the move and one commenter even referenced that Nikola Tesla would be proud:

“Let the future tell the truth, and evaluate each one according to his work and accomplishments. The present is theirs; the future, for which I have really worked, is mine.”
— Nikola Tesla (1856-1943)

“…we felt compelled to create patents out of concern that the big car companies would copy our technology and then use their massive manufacturing, sales and marketing power to overwhelm Tesla. We couldn’t have been more wrong. The unfortunate reality is the opposite: electric car programs (or programs for any vehicle that doesn’t burn hydrocarbons) at the major manufacturers are small to non-existent, constituting an average of far less than 1% of their total vehicle sales.”

Basically, Musk is saying that the other guys are all talk. That there is a better way forward. And that he will do everything he can to try and propel the industry ahead. Musk further explains his belief by saying:

We believe that Tesla, other companies making electric cars, and the world would all benefit from a common, rapidly-evolving technology platform.

The real driver of this is innovation. this opens up massive opportunities for engineers and small companies to get involved and do something powerful. Don’t be surprised if you see a crowd-funded electric car battle pop up very soon!

How can YOU apply the Tesla Patents lesson to your business?

It is all well and good for an innovator like Tesla to open its doors, especially as they are making some serious cash now, right? But how could you possibly do something as bold as that? How can you be accountable to your customers to do the right thing and create lasting change in the marketplace?

I love competition. I love winning. I said it and I am not ashamed.

Imagine if you had a group of businesses that were in the same market as you and all held the same values as you did. What would happen if you collaborated with them and did something BIG for your industry?

Ask yourself what it would have to take for you to refer someone to a competitor. And what would you have to do to get referrals from your competitors?

When you start thinking in these terms, you change the game. In business, there is no real scarcity, only a scarcity mentality. Change your thinking.

Most business owners I work with are deathly afraid of sharing all of their secrets. Imagine if you had the Tesla patents. Would you have the guts to make them open source?

“What if people steal my ideas?” they ask.

If you look at the Tesla example…NO ONE IS GOING TO STEAL YOUR STUFF.

“What if I put all of my information online and then they don’t need me?”

First off, if you are GOOD, people will need you and can’t get everything from your content to help themselves. Think about the difference between reading a book and having the author consult you. Secondly, NO ONE READS EVERYTHING. No one will read all of your content. No one. They will read maybe a few things to determine if they like you, if they trust you, and if they need you. Once they do that, you’re hired.

Really take a look at what Musk is saying. He is saying to his competitors, “Go one and copy. Be my guest.” And while they are trying to catch up, Tesla continues to innovate and push the market forward. And attracts the BEST people to work for them.

Put everything you have in front of people. Your best stuff. For free.

I can attest to this. When I started blogging my best ideas, my client list shot through the roof. Even with detailed, point by point articles, with video, they say, “Hey can you teach us that?”

But if they don’t know, like, or trust you, why would they bother working with you? Get your stuff out there!

In your industry, what can you do that looks like a CRAZY move? What will you do to “go first?”

I challenge all of my clients to look at their sales process in a completely different way. Rather than features and benefits and speaking to the logical brain of their customers, we focus on the limbic system and tapping into emotions. I am trying to teach traditional salespeople how to “unsell.” Flying in the face of pretty much everything they have ever heard.

We have more fun, we increase revenue, and we simplify things so they can focus on doing their best work. But it takes guts on their part, and hard work.

So think about YOUR industry. What can YOU do to be more like Tesla? How will you be a leader and challenge your comrades to join the battle? Will you get behind new ideas, even if they’re not yours? Let’s do it!