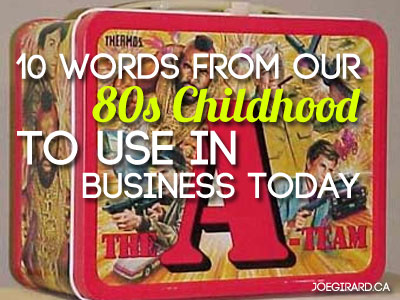 I think that perhaps sometimes we take things too seriously.  Amirite?  And that business interaction after interaction kind of just blend into each other and get pretty redundant.  I am also a massive fan of shaking people out of their normal thought patterns and bringing their attention snapping back to me. So today I think we should have some fun and bring back some totally tubular words that we all know so well and inject them into our conversations over the next week.  Sound cool?

Okay here we go with the words from our 80s childhood:

The meaning of the word is to go to the extreme and pushing the edge of the envelope. Typical Usage: “Dude, let’s catch some gnarly waves with Spicoli.”

How you should use it:  There are two primary ways to use this word.   The first one is in preparation for a big presentation, typically with a partner or team.  “Dude, let’s rock out a totally gnarly presentation.”  The other way, which would be more common is in a state of excitement after a successful presentation.  “Dude!  That presentation was so Gnarly! We totally did it to the max.”

Of course, this phrase was from our favorite leprechaun and our beloved children’s cereal, Luck Charms.  We all know the deliciously sweet taste of fake marshmallows coloring our milk and getting us amped for the day ahead.

How you should use it:  The best instance to use it would be after reading a long piece of information that you are pleased with.  ie a proposal or report.  “Wow, I took some time to go over these figures, digest what they meant, and I must say…they were magically delicious.”

The origins of this phrase of course, is the Simpsons and was Bart’s go to comeback when he effed up.

How you should use it: When meetings are getting a bit heated, try and create a bit of a pause long enough to say, “Don’t have a cow, man.”  To make it more effective, ride at your target on your skateboard and give them a high five.  Should absolutely bring them back to reality.

This could be said as rad or radical (prefer the latter) and is an exclamation of something awesome.  ie, “Hey Chet, I love your rad vans.” or “Oh man, try this Pogo Ball! It is totally radical!”

How you should use it: Out of all the words on the list, this one has the most versatility as it can be used to describe people, situations, or just about anything.  “Hey Jim, that speech you just gave was totally rad.  You are one radical dude.”

A very common dubious way to be sarcastic when I was growing up where the recipient would hear the word psych after a lie.  Very misleading.  For example, “Hey bro, you can totally have my TMNT Krang figure.  PSYCHE!”

How you should use it: Today, this word would be most prudent in a less formal setting to ease the tension during a conversation.  ie. “Hey, sorry boss – I actually didn’t make my numbers this month and am way behind.  Psyche! We are totally bitchin on our stats.”

Originally made popular by Bill and Ted in their Excellent Adventure, the term bogus gained in popularity and was often used to voice displeasure over an unexpected event.  ie, “But you told me I could stay up and watch the GI Joe Movie, but now you say NO?  That’s totally bogus.”

How you should use it: When a promise is not kept by one party, it is a very fitting phrase to use to show disappointment.  “But you said you would get that report in on time and now it’s late?  Bogus, man.”

Not a totally common word, but effective nonetheless, the term dweeb  was most often used to describe a nerd or a geek, but it’s popularity came from it being less harsh sounding .  “Oh Steff, you’re such a dweeb for playing with your Teddy Ruxpin.”

How you should use it: Use some caution when using this word so as not to come off derogatory.  I would suggest in a situation where someone does something overly-techie. As in, “Hey awesome spreadsheet bro!  I could never do that, but you are such a dweeb for knowing how!”  or “Thanks for helping me sync my contacts on my phone.  I wish I was more of a dweeb like you.”

This one takes two skills to master, the pace and the valley accent, but when you get those both down, you have a winner.  This was used in the 80s most effectively to highlight the point you are trying to make.  ie. “Did you see Inspector Gadget this morning?  Dude, fer shur!”

How you should use it: Use this to let someone know you are totally down for the plans they propose.  For example, “Do I want to go for lunch?  Fer shure, Dude!”

A very powerful phrase that often indicated complete displeasure in someone’s actions.  Typically after they had made a mistake.  ie “What do you mean, you broke my transformer?  Smooth move, Ex-Lax!”

How you should use it: Best usage of this phrase would be in a group setting to chastise a member of the team publicly for letting everyone down.  ie “You forgot to print out the documents and now we have nothing?  Smooth move, Ex-Lax!”

The longest phrase of this list and perhaps the most annoying of all time.  Originally from my childhood hero, Peewee Herman, this sentence was used to create instant anxiety in all who were forced to listen to it.  It was most commonly used as a comeback to an insult from someone else, and would render them unable to carry on insulting.  For example, if someone called you a dweeb, you could simply respond and say, “I know you are but what am I?”  And then when they would start to speak again, you would just say, “I know you are but what am I?”  Highly effective.

How you should use it: The most prudent place to use this would be during a performance appraisal  if you find there is an area you don’t concur with.  ie, you are told that you have had a reputation of not being cooperative in group settings, you just say (in a high pitched voice), “I know you are but what am I.”  And then keep repeating that whilst you walk out the door.

I hope these phrases help you as you as much as they have me in my professional career.  Use them wisely and you will be rewarded.  And please remember to LIKE and SHARE this and leave any comments you think would be gnarly.

Joe helps others leverage their unique skills and abilities to become unstoppable.He is a speaker, trainer, and consultant always looking for interesting projects.DOWNLOAD Joe's FREE ebook "20 Tips to Create a Powerful Personal Brand."Joe also is the owner of Change Grow Achieve, helping people transform their businesses with powerful leadership, marketing, and sales strategies.
Follow me!

Share YOUR Thoughts and Ideas on This Topic: Cancel reply