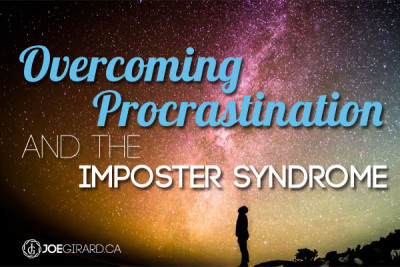 Have you had any projects that have gone unfinished because they weren’t “perfect?”

Are you sitting on them right now? We all struggle with trying to be the best versions of ourselves and often this can lead to resisting finishing projects.

In this post, we will take a look at this totally normal fear, why it’s so common, and how you can push through and get that project finished!

Last week, I talked about getting things done and it was more focused on the processes of closing those open loops. Today, I want to talk about the mindset of not getting some things done, simply because we are worried about what happens when we finish.

Last year on May 22, I wrote a post on how I wanted to write a book and that I was stalling on it. I have a great plugin on my site that counts words and since that post, I have written 103,890 words. That’s the equivalent of two books!

Why do we procrastinate on our ideas?

Soo….I still haven’t even STARTED writing that book. Why? Well, I know that most likely it is a few reasons:

Do any of those thoughts resonate with you?

Guess what? That’s normal. These ideas creep in and keep us stuck.

No matter what level you are at, it is a completely normal feeling to not want to be an imposter. When you see some of these gurus online, just know that they feel the same way and have had to constantly overcome these challenges.

I don’t remember where I heard this recently, but it’s so true. Have you found yourself telling others about all the great stuff you’re “working on” so that they will admire you?

The trick here is that if you never finish the project you, you can’t be judged by others. So it’s safe to have big ideas and never see them through. I see this happen all the time with WANTREPRENEURS. You know the type…

And it’s also common to lie about the amount of effort we put into things so we can seem better in the eyes of others.

Of course it’s terrifying to put yourself out there and risk being judged, so the natural reaction is to just not get it done. It’s safe. You can go out and tell others what you’re doing, they can do the same, and everyone can feel good about “upcoming” exciting things.

Have a look at this great video by Rob Scott who gave a talk recently at Google where he speals about this imposter syndrome.

The big fear that’s happening in your mind is around how you’ll feel when you finish what you’ve created. That worry of perfection and character…

A few years ago, a friend and I came up with an idea for a pretty cool business and we had all the right ingredients for success. But, no matter how we thought about it, he had one major fear:

“What if we finish it and it doesn’t work? What if no one likes it?”

And I realized that his major fear was that if this thing didn’t work, he felt it would be a reflection of his character, it would have been the only chance for success, and it would ultimately make him feel like he had no option but to just stay as an employee. And that fear paralyzed him enough to walk away from the idea.

Because if we don’t do our best work and just kinda dip our toes in the water, we can easily walk away from it and make excuses. But if we put our best work forward and it fails, we think of ourselves as a failure. Sound right?

Your value is not in your performance

This may seem counter-intuitive to the idea of getting results, especially in sales, marketing, ROI, etc. But what I mean is that your real value is in your ability to put your best self forward and constantly adapt. Being able to fail forward is what winner’s do and is a heroic character trait.

Let me take it back to performance for a second. I coach and train people to increase sales. I love it. And we MUST get results or I am really not very valuable, right?

But your value is not linked to your performance. Your performance is a measurement, sure. But your VALUE is not how you perform, but rather your ability to self-reflect, adjust, and improve. To test, to fail, to get better. Over time. Like a superstar.

You see, when I manage people, I tell them that I like to put them into two groups:

And then I break it down:

It really is that simple. If someone actually wants to improve, but doesn’t know how, AND is also coachable, then we can move mountains together. If someone makes excuses, constantly doesn’t try, or is always afraid of what others think, we can’t really do much with them. This philosophy has helped me get my teams out of their own way and see that it’s totally okay to try new things. It frees everyone up and gives you permission to be your best self.

It’s when you refuse to try. That’s what makes it so I can’t help you.

This is a big reason I focus my training on activity rather than results and always look to build best practices instead of just metrics. Results are just the byproduct of activity. Activity you can control, results you can’t.

It’s totally normal to have doubts and insecurities, but it’s how you overcome them that will define you. [Tweet “Being able to fail forward is what winner’s do and is a heroic character trait”]

It doesn’t happen overnight, but it happens

This year has been a big year of growth for me and what’s been super cool is how things I did three years ago are paying off today. Videos I did that, by my today standards, aren’t that great, have just recently landed me a $10,000 project.

The trick is to just be there tomorrow. And next year. And the year after.

I saw a killer video the other day by Gary Vaynerchuck where he talked about the fallacy of overnight success. He says that there is no such thing as an overnight success and I 100% back him on this. Have a look:

Focus on feedback loops rather than perfection

All you need to do is tackle one project at a time and get it done. Release it to the world and see what happens. The faster you release your work, the faster you can get feedback.

I have learned this lesson many times in my life.

Test stuff and see what people like. Ask for input and ideas. Take those ideas and improve the offer. Keep evolving until it gets better. I have put off some major projects for fear they would be less than perfect and then when I released them to the world, I heard crickets chirping. It was kinda “meh” reactions. (Insert sad face emoticon here)

But on the flipside, I have just thrown a cool, unfinished idea together and people ate it up! They paid big bucks for it. And it’s in those moments of getting customer feedback I’ve realized that it is all about the audience, not me. Crazy, right?

Now, I make sure that every project I put out has a testing component for feedback, and then a completely transparent and open series of feedback loops so that we can constantly make things work for the client.

It’s soooooo much easier when you remove your ego and let the creative process be around the experience for the customer.

[Tweet “And it’s in those moments of getting customer feedback I’ve realized that it is all about the audience, not me.”]

Overcoming procrastination can be massively rewarding

Since I made the mindset shift to more of a GSD (Get S**t Done) attitude, I am putting out new cool things all the time! As I just dive in, I learn a ton and it constantly evolves. Previously, when I waited, I got anxious all the time. Now, it is a blast just having fun trying new things with my business. As we learn, we tighten up processes, expand offerings, and create exponential growth in results.

Here are some of the projects I launched or revamped this year that I would love for you to check out:

Plus, I am putting the final touches on the Sales Hero Academy which will be launching soon! It’s my online sales training program and I am pumped about it! If you go to the site, you can sign up to be on the earlybird list. It’s going to be awesome!

And now, all of this has created momentum and driving new business constantly. So it’s all good.

The funny thing about all of this was that none of these were major projects that required massive effort. But, they sat in my head for months and years and made me feel frustrated. Do you have ideas like that? They keep adding up and you just get overwhelmed?

So pick something. One thing. Take action on it. Don’t worry about it being perfect. If you are really worried, offer money back guarantees. It’s rare people take you up on those, unless your stuff is really brutal. As you test it out, learn from your work and make improvements.

For example, I showed a marketing friend the inside of the Sales Hero Academy yesterday. He found some things I could fix and ways to improve it, but that’s what I have the beta group for. Worse case scenario, I need to change a video. I will re-shoot it, and replace it on Vimeo. That’s a 30 minute project. No problem.

So go out and conquer something. Who cares if ZERO people like it. Do it for yourself.

Oh, and what about that book? Well now that I am getting traction on all the other ideas, it has become crystal clear. “The Sales Hero” will be the book and it will include all of the best practices from the tested ideas and content in the academy. So stay tuned for that!

Remember to like and share this post! And post your comment below about what you want to conquer or have conquered. If you’re feeling brave, make an announcement of a new project and when you will have it finished so we can hold you accountable and check it out!